Source the bulls with the highest female fertility and high production Improve both production and daughter fertility

Are you overlooking the passive improvement you could gain in your herds’ fertility?

In combination with good management practices, a consistent focus on breeding for better fertility plays a critical role in improving your bottom line. Poor fertility is among the most common culling reasons in dairy herds worldwide. Dairy producers need no reminding of the importance of fertility to the success of their business. They’ve worked hard to improve their herds’ reproductive performance, above all as a means of maintaining efficient milk production and profitability. But some may still be overlooking the passive improvement they could gain in their herds’ fertility – with little extra effort or cost.

A large study with converted Interbull proofs on 55,000 bulls, investigates the genetic level of fertility. Data included in the study covers the daughter proven bulls born during the period from 1995 to 2015 (2015 is the birth year for latest daughter proven bulls). The study contains data from the major Holstein populations around the world, in the Nordic countries (DFS – Denmark, Finland, Sweden), USA, Canada, the Netherlands, France and Germany. A bull is connected to the specific country under the condition that this bull has the majority of his daughters registered in that country. In table 1, you see the number of bulls. 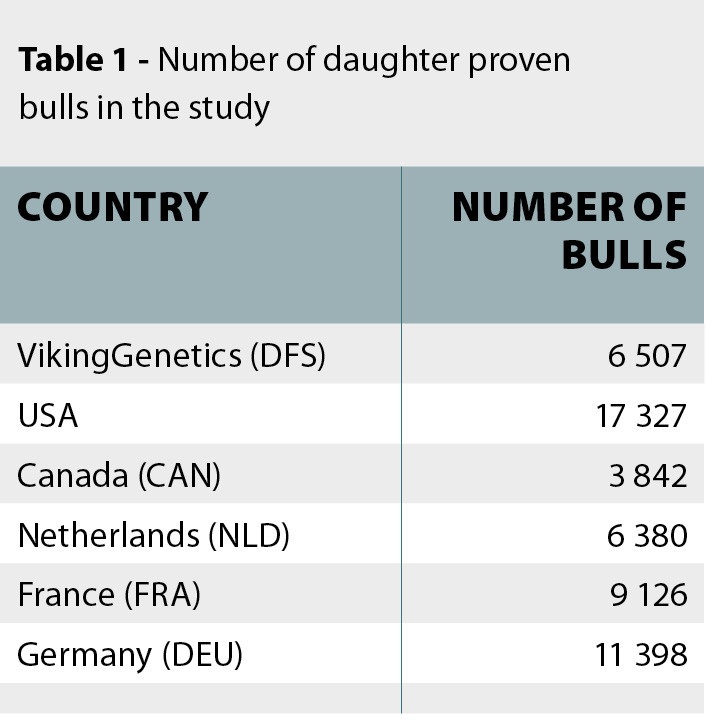 Genetic trends have in general been improved in all populations since 2000. The genetic level of the bulls from the Nordic countries shows superior level for the trait “first to last insemination for cows”. The superiority is 6 units in 2015 with a standard variation of 10 units. The fertility trait is low heritable and therefore only small improvements from one generation to the next can be expected.

“There is great potential to increase earnings by focusing on sires that in addition to the well-balanced profile, have a superior genetic level for daughter fertility.” says Claus Langdahl, Senior Breeding Manager for VikingHolstein. “For example, based on the Nordic conditions, a sire with EBV 120 (two standard units better than the average) for the trait ‘days from the first to last insemination for cows’ reduces the insemination period by 16% – that is 8 days less than the population average for the breed. Similarly, a sire with EBV 120 for ‘number of inseminations per pregnancy for cows’ improves the conception rate by 7%, meaning one pregnancy requires 1.86 inseminations (54% conception rate). That saves you approximately 42 EUR per cow per year. For a herd with 500 cows that is 21,000 EUR extra earnings per year.” says Langdahl.

High production and superior female fertility at the same time

It is known that there is a negative correlation between production and the health and reproduction traits, which means that if you breed for production, you will lose genetic level in traits like female fertility, general health and udder health. However, with trustworthy data and well-balanced selection, it is possible to avoid this situation. The breeding program behind the genetics in VikingHolstein proves that. The same data from Interbull based on daughter proven bulls is also used to describe the genetic level of the production index. This is the production trait with the weights that is used in the Nordic countries with milk -0.25, fat +0.55 and protein +0.70. These are the weights that related to the milk payment model. The genetic level of bulls by country by birth year is shown in Figure 2 for the overall production trait. It is interesting to follow the genetics development in the countries. It is obvious that the genetic trend has been high in all countries and it is interesting to see the small difference that we see today in the genetics level. The Nordic countries prove that a high production and superior female fertility is possible at the same time. A Holstein cow always has the potential for high production, but good economy at farm level also depends on other traits such as female fertility. That is why we are proud to say VikingHolstein is the source of high production and world’s highest female fertility. 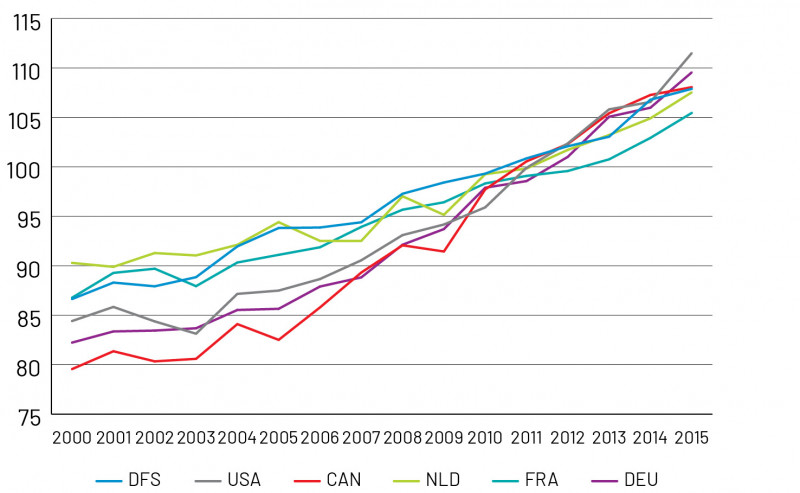